As any parent will testify, certain foods can have a dramatic effect on a child’s behaviour. As early as the 1950’s, artificial colourings were being linked with behavioural issues amongst other health problems in people and several recent scientific trials have shown a clear link between food additives and ADD (attention deficit disorder) and hyperactivity in children. Unfortunately, the effects of these ingredients seem to be exactly the same for our dogs with reduced attention spans and hyperactivity regularly reported.
Common colourings found in dog foods include sunset yellow, tartrazine, ponceau 4r, patent blue V and titanium dioxide, although they may also be listed by their E numbers or simply as ‘colourings’. It is also worth mentioning that most studies indicate that dogs are largely colourblind so the only role of the colourings is to appeal to the owner and not to the dog. 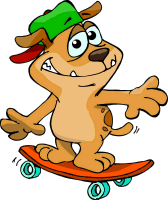